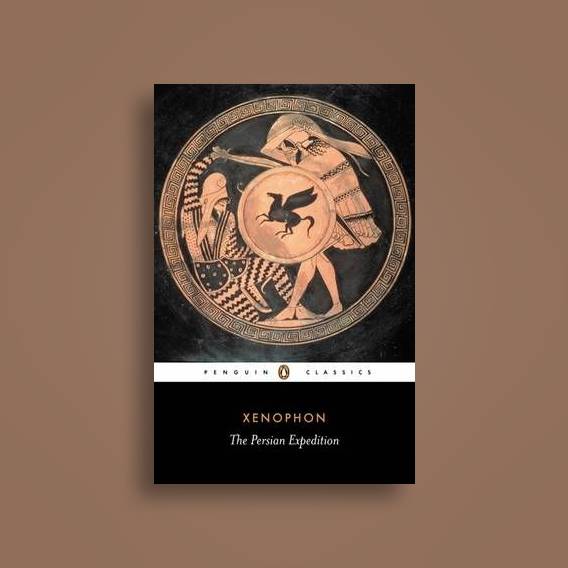 Facing certain doom, Xenophon, a young Athenian with little military experience, took command and led the Greeks to safety against all odds. The Persian Expedition is more than your average history book, however. The book can also be read as a manual for effective leadership. Xenophon not only exemplifies the qualities a strong leader, but he also takes time in his book to discuss the differing leadership strategies of several of the Greek generals and of the Persian Prince, Cyrus.

In describing Cyrus as a leader, Xenophon attributes to him the qualities of generosity and justice. Cyrus was fond of saying that he wished to live long enough to pay back with interest both his friends and his enemies. Xenophon also introduces us to the leadership style of the Spartan, Clearchus, who ruled by fear and severe discipline, leading to success in battle but not to loyalty among the soldiers. Clearchus is contrasted with the Theban, Proxenus, who was a virtuous, and noble general, but whose good nature was exploited by his men.

Xenophon observes that Proxenus would be an effective general if all of his men were as virtuous as he. In such ways, Xenophon paints a picture of what he considers the good and bad qualities of an effective leader of men. The genre of the travelogue is not currently very fashionable, but the descriptive experiences of a traveler on his journeys used to more popular among civilized readers.

The Persian Expedition certainly has much of the characteristics of the classic travelogue. Xenophon describes landscapes, towns, wildlife, and landmarks. Some of the more delightful passages in the book explain the strange customs and manners of natives encountered on his adventure. During a particularly difficult march through deep snow, Xenophon relates the respite the army received from a people who lived underground with their livestock and who drank an alcoholic drink from a huge communal bowl through long reed-straws.

Xenophon also relates the approximate marching distances from town to town, mapping the Empire using the Tigris and the Euphrates as reference points. All of this provided for the Greek something new: a glimpse into the mighty and mysterious Persian Empire. Xenophon drew back the curtain and revealed the customs and ways of the Persians on both a public and private scale. This aspect of the book was recognized by Alexander the Great forty years after it was written.

153 editions of this work

This drawing of the curtain also reveals another possible genre for The Persian Expedition. After arriving back in Greek occupied territory, Xenophon had to undergo legal scrutiny for a few episodes that occurred during the long march home. While Xenophon was publicly exonerated, there is certainly something in the book that suggests an Apologia. He was given an estate at Scillus and settled down to enjoy the life of a landed aristocrat, and it was during this period that he began to write histories, biographies, memoirs and specialist treatises.

The defeat of Sparta in forced him to move to Corinth where he probably lived for the rest of his life. He has specialized in the history of the fourth century B. Cyrus Builds up His Army 2. The March from Sardis to Tarsus 3. Clearchus Deals with a Mutiny 4. Through the Syrian Gates and Across the Euphrates 5. The Arabian Desert. Quarrel Between Menon and Clearchus 6. Cyrus Deals with a Traitor 7. Cyrus Prepares for Battle, but the King Retreats 8.

The Battle of Cunaxa and Death of Cyrus 9. The Character of Cyrus The King's Messenger 2. The Greeks Join Arieaeus 3. The Greeks sign a Treaty with Tissaphernes 4. The March Begins with Mutual Suspicion 5. Tissaphernes' Treachery 6. Xenophon Takes the Initiative 2. The Council of War 3. The Greeks Suffer from Slings and Arrows 4.

Tissaphernes Still in Pursuit 5. The Entry into Kurdestan 2. Fighting in the Mountains 3. The Crossing into Armenia 4. They Sack the Camp of Tiribazus 5.

Marching Through the Snow 6. They Capture a Pass by a Manoeuvre 7. The Greeks Catch Sight of the Sea 8.

Chirisophus Goes to Get Ships 2. A Plundering Expedition 3. As Gisela M. Richter and Bryson Burroughs noted in the Bulletin : "It is the hope of the Museum that the excavations will not only enrich its collections but will provide valuable archaeological information to help in reconstructing the cultural background of those little-known periods. The entirety of Chaves Yates's essay , along with more than one thousand others spanning the full range of the Museum's collection, is available on our Heilbrunn Timeline of Art History.

We welcome your participation! Please note that while lively discussion and strong opinions are encouraged, the Museum reserves the right to delete comments that it deems inappropriate for any reason. Comments are moderated and publication times may vary. Explore rich articles and multimedia features about the Museum's current exhibitions, events and performances, announcements, behind-the-scenes activities, and more.